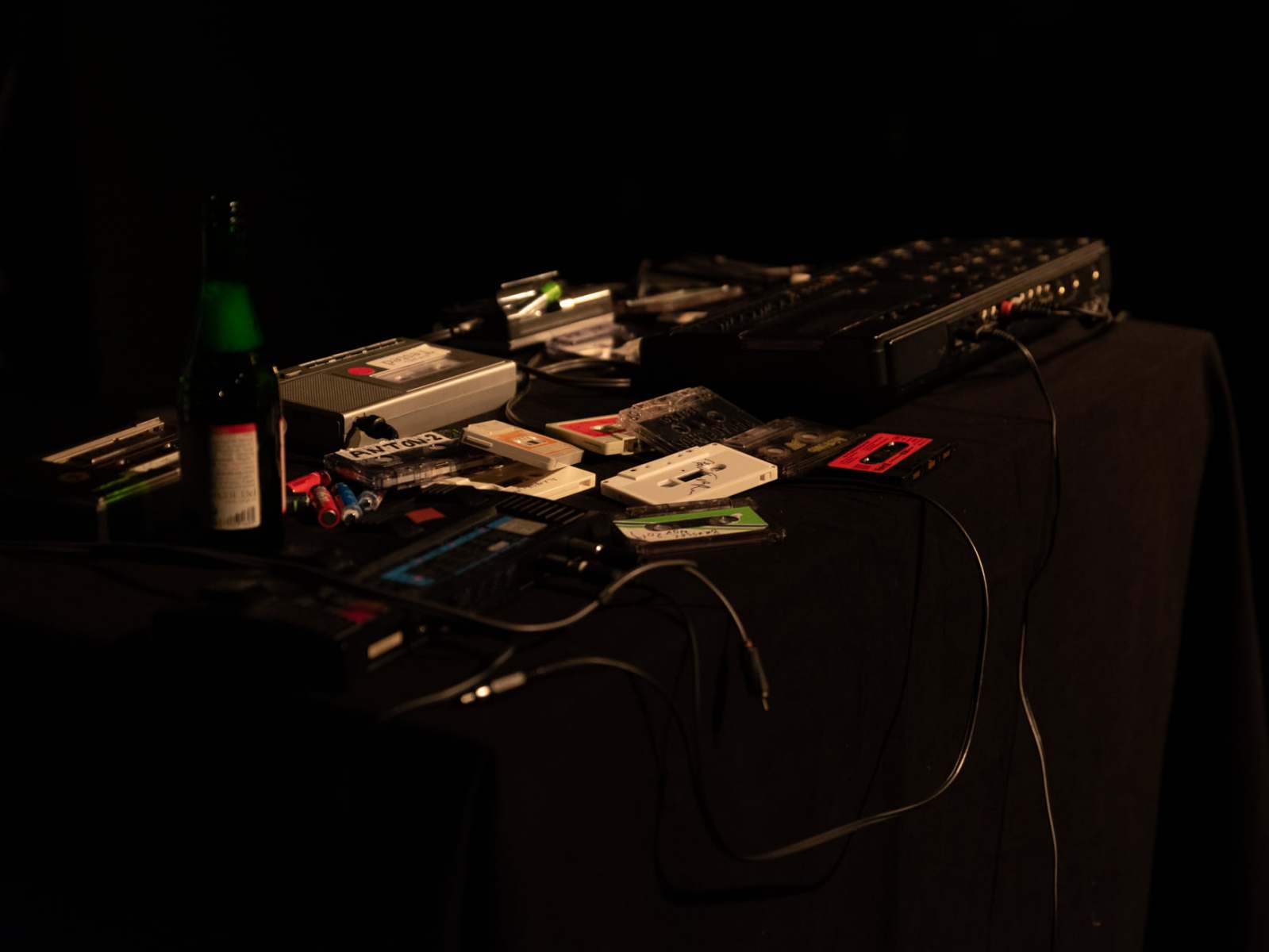 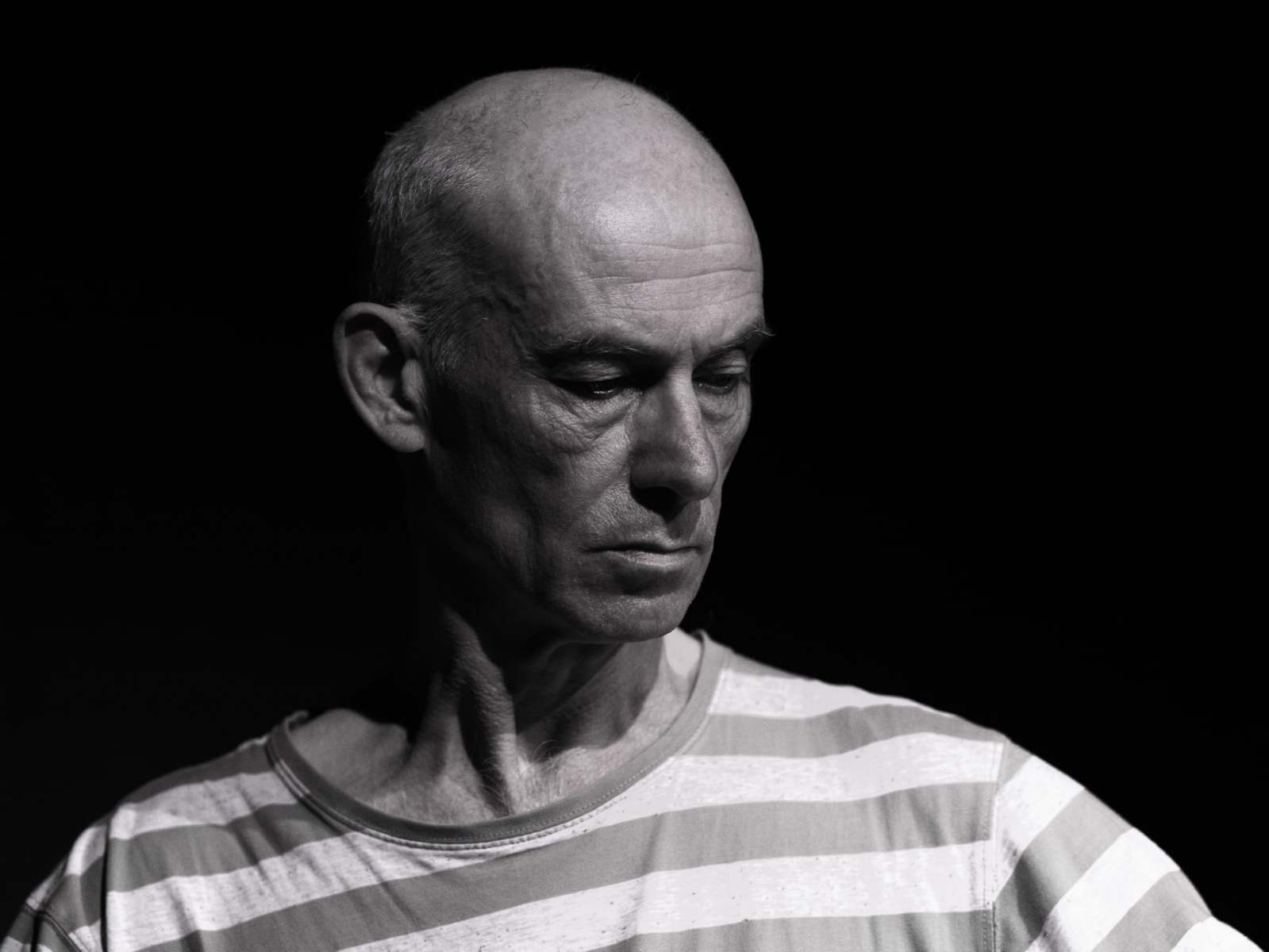 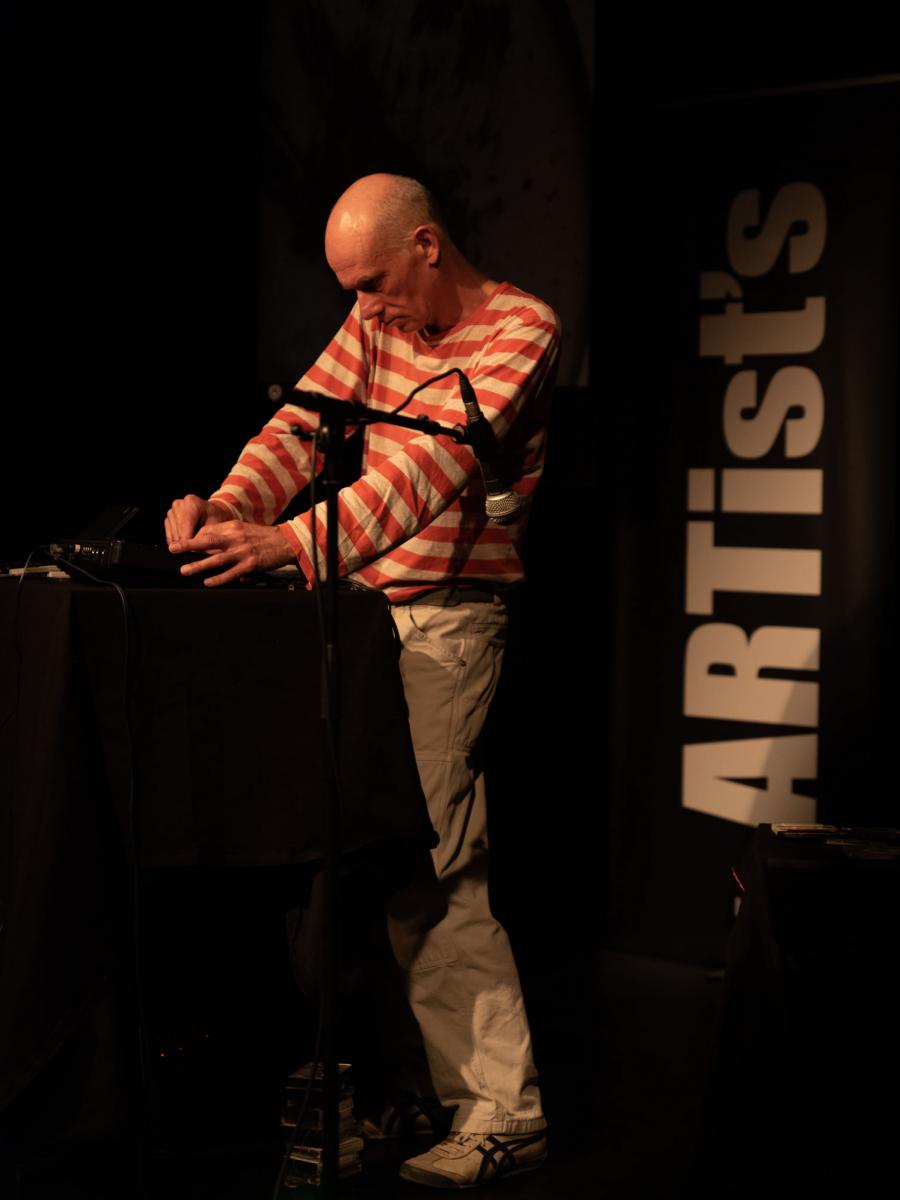 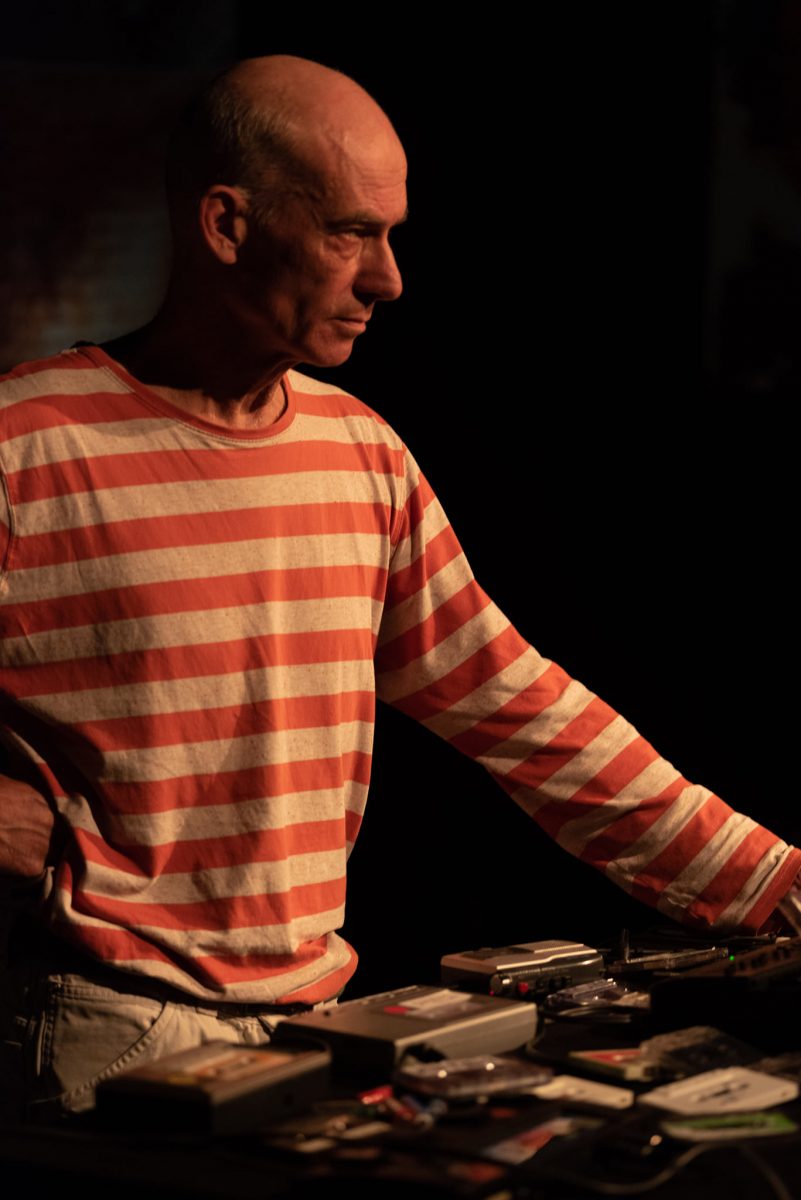 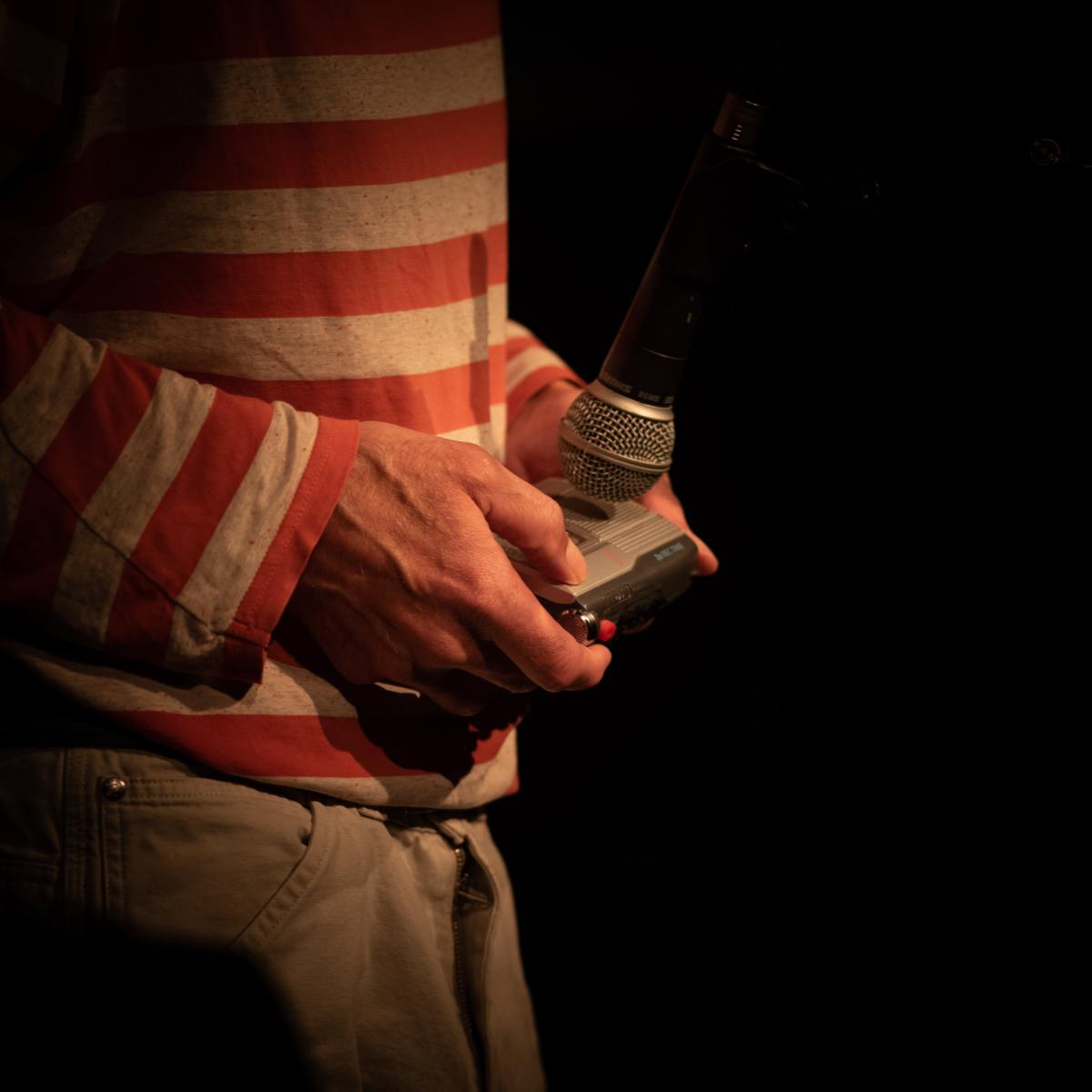 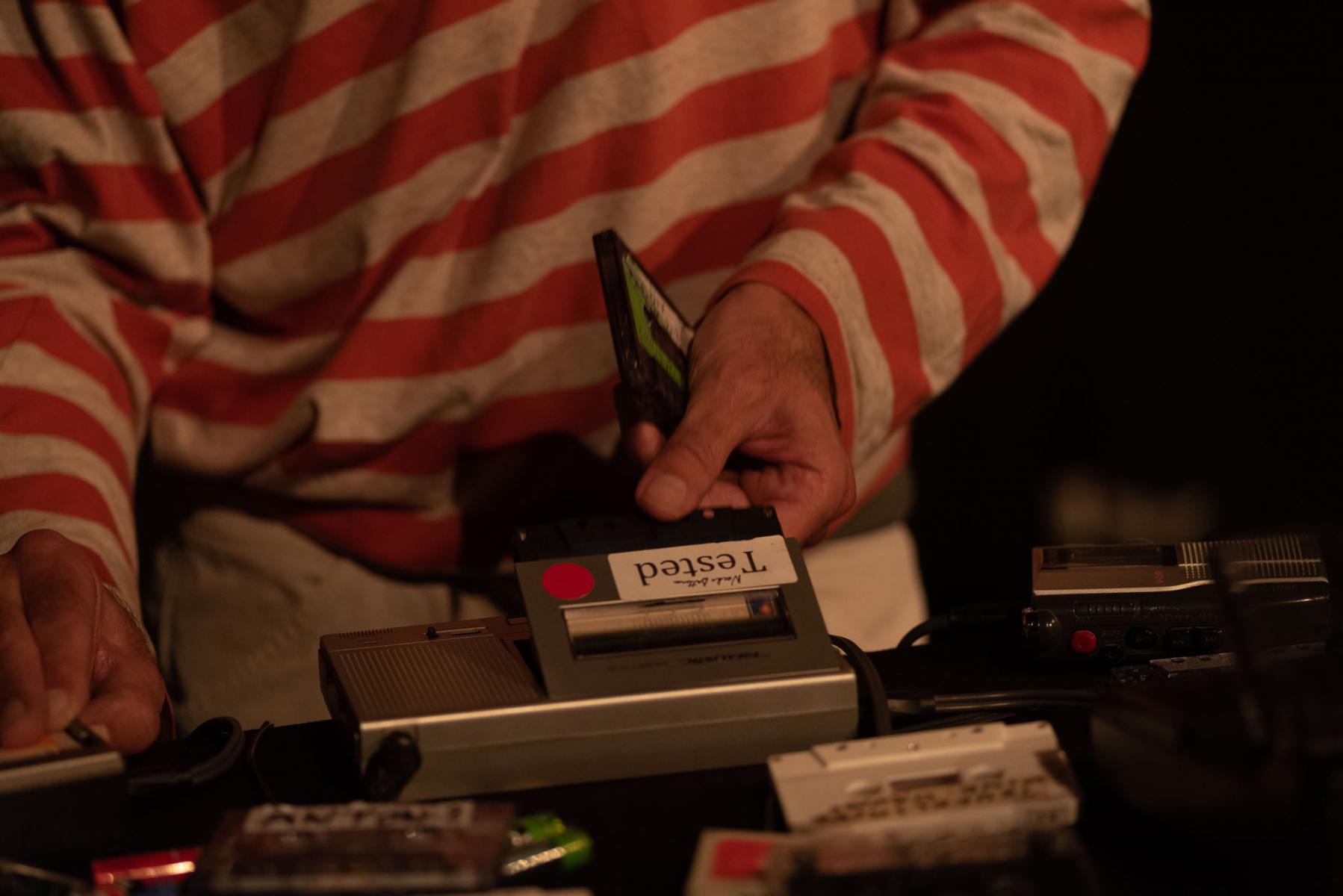 Rinus van Alebeek debuted as a writer winning the Geertjan Lubberhuizenprijs with his first novel, De Weg naar Oude God, and throughout the ‘90s he published other books with both the same pseudonym Philip Markus and his real name. His writings, mainly about travelling or walking through space in an ever-receptive mode towards the surroundings passing by, make landscapes and cities speak, trying to find stories in them and in the passage through them. This attention to the environment and the informational potential of its multisensorial elements slowly led him to sound recording: his books Stop the Music and Deep Poland discussed various aspects of the sound experience, but it is since the early 2000s that the writer started to use also environmental recordings on cassettes to narrate stories.

Currently, Rinus van Alebeek is the caretaker of the legendary label Staaltape, co-founder of Radio On Berlin, sound cassette performer and member of several experimental music projects. In his practice, found cassettes are often used as media support or raw material for works and publications, together with field recordings and sound manipulations operated directly with walkmans. This approach encompasses not only a specific sound aesthetic, but also a narrative perspective typical of the novel writer, regarding his tapes also as “a recording of something that happened in the past, or a reference to the passing of time and the layers of experiences that get drowned by our memories.”

Ana Kravanja and Tijana Stanković have released their first album “trkam kličem odganjam / kucam dozivam teram” in April 2019. It is a product of two musical residencies in Budapest, Hungary and Lesno Brdo, Slovenia. The goal of residencies was research in sound, vocal and violin expression as well as a search for a connection between each player’s idioms, style of improvisation and traditional and contemporary elements in playing. They have performed in Kek Lo, Budapest (HU), in Defonija, Klub Gromka, Ljubljana and Keltika concert series in Cerkno (SLO), Celeste and Rhiz in Vienna (AU).

Tijana Stanković is a violin player and singer from Serbia. She have studied Etnomusicology in Novi Sad. Field of her interest includes folk music of the Balkans, free improvisation and contemporary music, “world” as well as applied music. She has collaborated with many eminent musicians and composers such are Mezei Szilárd in Improvisers Orchestra (INT), Túl a Tiszán Innen Ensemble (SRB), Identity’s Dream Quartet (SRB); Iancu Dumitrecu and Ana Maria Avram in Hyperion Ensemble (INT); Márkos Albert in Argo (HU), Words and Music (HU) and work on theater and film music; Nikolaus Gerszewski in Korpovit Trio (HU/AU); Miroslav Tóth (SK) in duo with whom has a release as well as Budapest Improvisers Orchestra (HU). Ongoing projects are playing/singing in a violin/vocal duo with Ana Kravanja (SLO), duo with Sofia Labropoulou (GR), duo with Luka Toyboy among others.

Ana Kravanja is a violinist and vocalist from Slovenia. She is active in musical group Širom, where she plays a myriad of homemade, traditional and classical instruments. As a violinist she has been free improvising with slovenian and foreign musicians and dancers as Samo Kutin, Tomaž Grom, Irena Tomažin, Vid & Jošt Drašler, Andrej Fon, Ina Puntar, Tea Vidmar, Tijana Stanković, Noid, Matija Schellander, Susanna Gartmayer, Aleksandar Škorić, Margarethe Maierhofer-Lischka, Henrik Olsson, Raphael Roginski, Ryuzo Fukuhara, Lotus Edde Khouri etc. She makes author music for theatre, films, animations, storytelling, poetry, dance and visual arts. In 2013 she formed a project Glacies, where musicians play on refrigerator shelves. In duo Najoua, with Samo Kutin, they made music for fourteen kalimbas and recorded two albums between 2012 and 2016. She also takes part in Olfamoštvo tentet.